Desert bases, plus odds and ends

Another weekend is upon me and my shipment from Picoarmor arrived, as well as one from Heroics & Ros, which included a very cool Timecast 6mm German church. 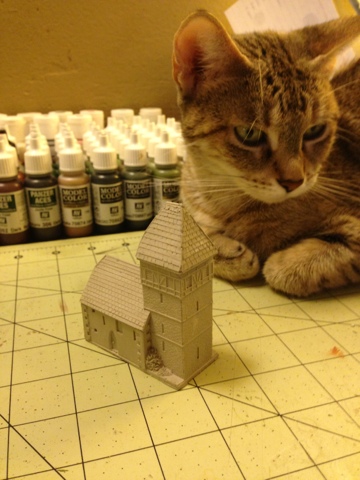 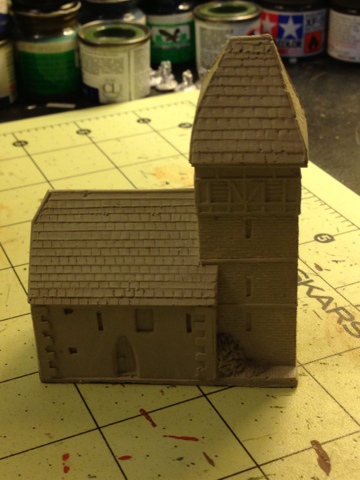 That's the painting supervisor and head of security in the first photo.

My Picoarmor order included Italian M13/40's, Bersaglieri infantry, British QF 2pdr anti-tank guns, and French 25mm Hotchkiss anti-tank guns, which the Italians used in some numbers in North Africa. It seems appropriate to talk about how I go about making my desert bases.

I start off with a thin metal base from Wargame Accessories and glue down anything that has it's own base, then I prime it. 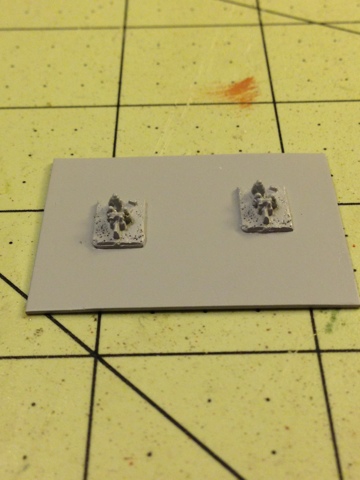 These are the Hotchkiss 25mm's. Anything that doesn't have it's own base will sit on top of the finished sandy base, not be imbedded in it. Now I liberally coat the base with undiluted PVA glue (Elmer's). 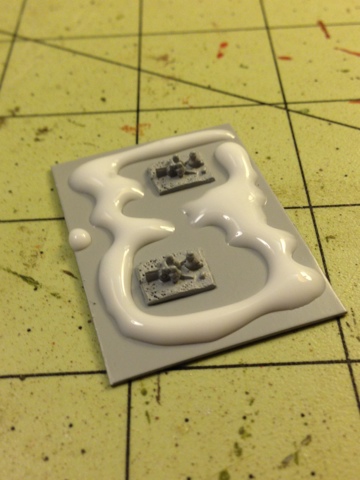 Then I use an old paint brush to push the glue evenly around the base, making sure it's right up to the edges of the miniatures. 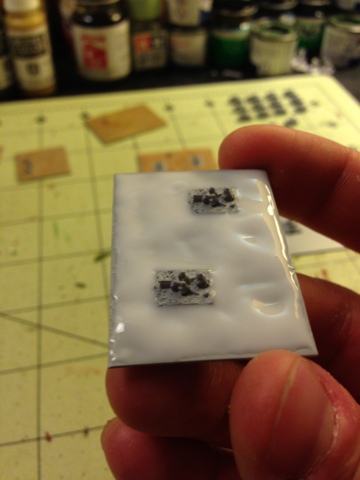 After a new house was built across the street from my apartment, the builders very kindly didn't think it was worth their time to scoop up the little leftover piles of fine sand they'd used to mix their cement, bless their hearts. So I took one of Mrs. History PhD's Tupperware containers and filled it up (kids, always ask your wife's permission before doing this!). I threw in a small handful of cat litter (unused, needless to say!!) and that's my desert material. 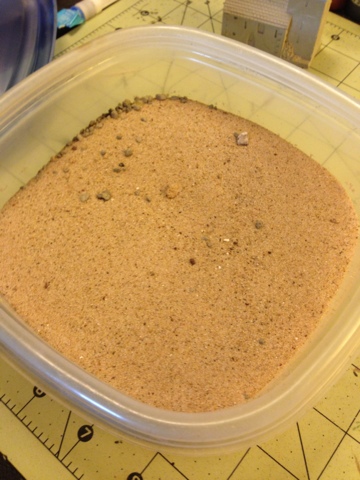 Now I pour a handful over my glued base 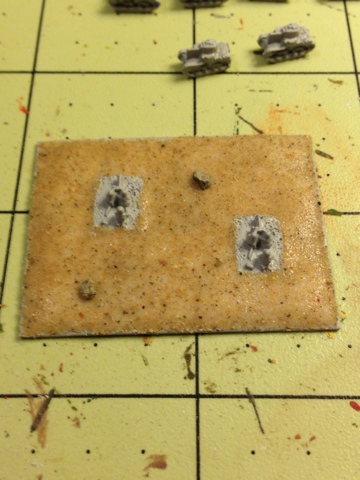 And this is what I end up with. As it dries, little gaps open up in the glue/sand mixture, so I fill them in with a touch more glue/sand. Normally, I'd pretty much leave that alone, but as you can see, the bases of the miniatures have to be painted a color that more or less matches the rest of the larger base, which isn't easy because no paint is a good match. Here are some Italian 47mm anti-tank guns: 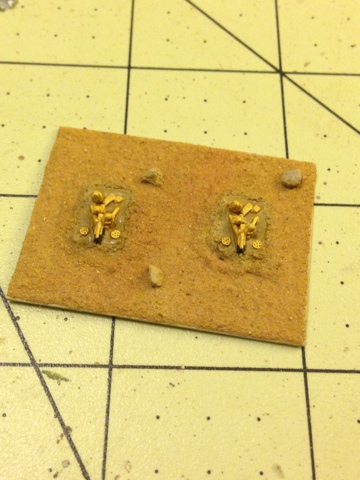 That necessitates a lot of dry brushing with various different shades of sand, a touch of light gray, and very watered-down patches of pale rust, in an effort to get everything to blend together. 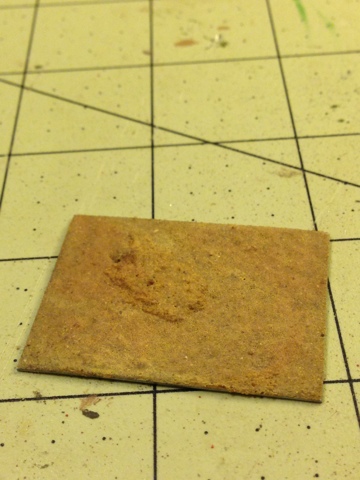 It's a whole lot easier to do bases where the vehicles have no molded-on base of their own and simply sit on top of the sand. A little bit of dark brown earth flock or burnt grass flock and maybe a pale green bush and that's it! 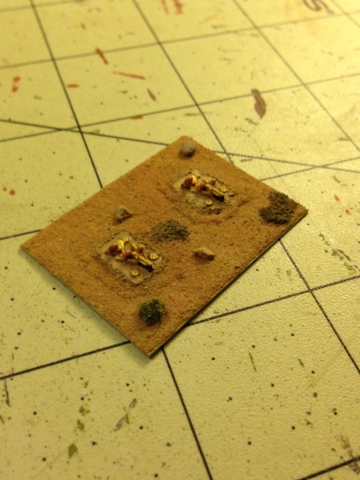 Those are my shirtless Italian anti-tank gunners. A spray with Dullcote and I'm finished. If anyone has more attractive/realistic desert bases, I'd love to know because I'm not 100% satisfied with mine.

And just to show that I'm not a "one trick pony", here are some Adler 6mm 1806 Saxons I've finished. Dragoons: 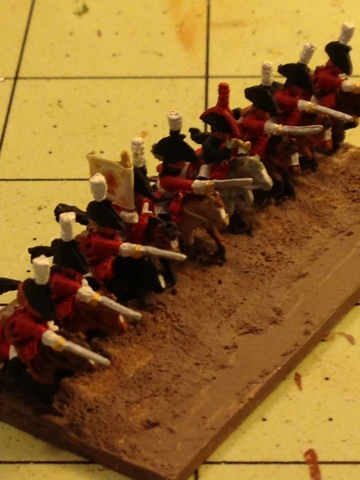 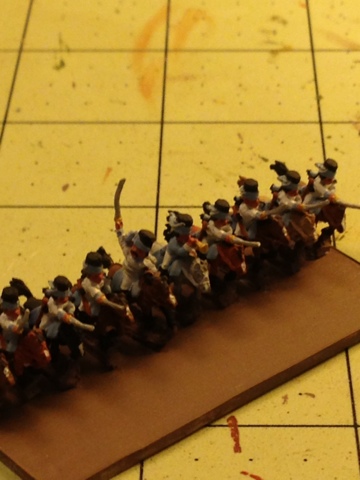 And a battalion of infantry: 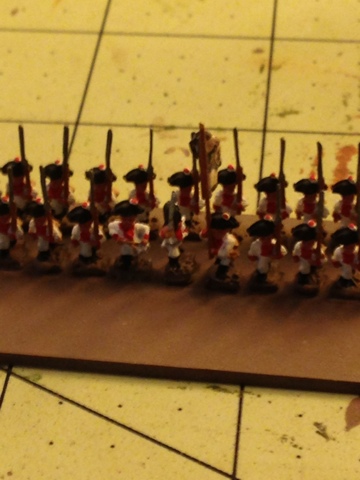 I haven't textured or flocked the bases yet though. They're based for Baccus' Polemos rules. And a Saxon general who's finished: 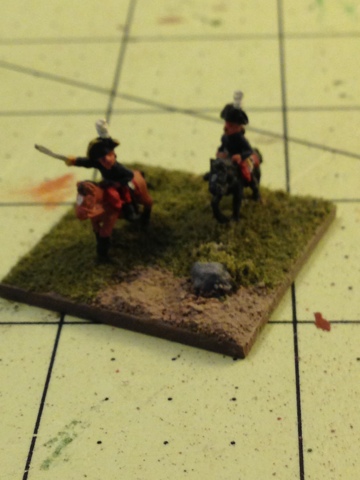 That's it for this weekend!