I've already covered the TO&E I use for making East German infantry platoon stands, so this weekend, I'll go over how I structure a Danish platoon.
After a bit of Internet research, a platoon of Danish infantry in the early 80s was made up of 3 squads. Each squad consisted of 4 riflemen, a 2 man LMG crew (the MG was a German made MG3): 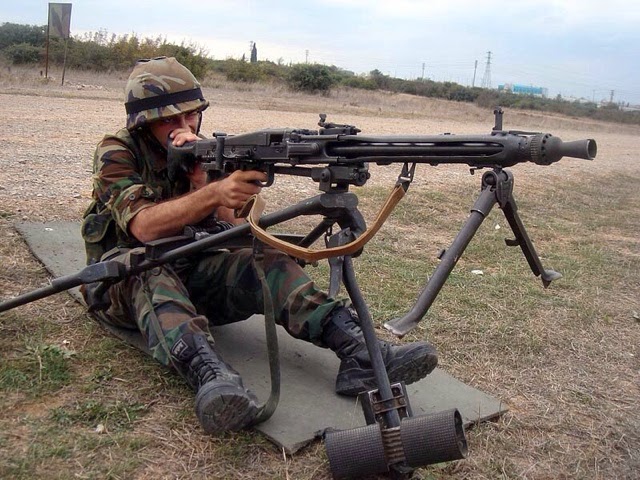 And a Carl Gustav with a two man crew: 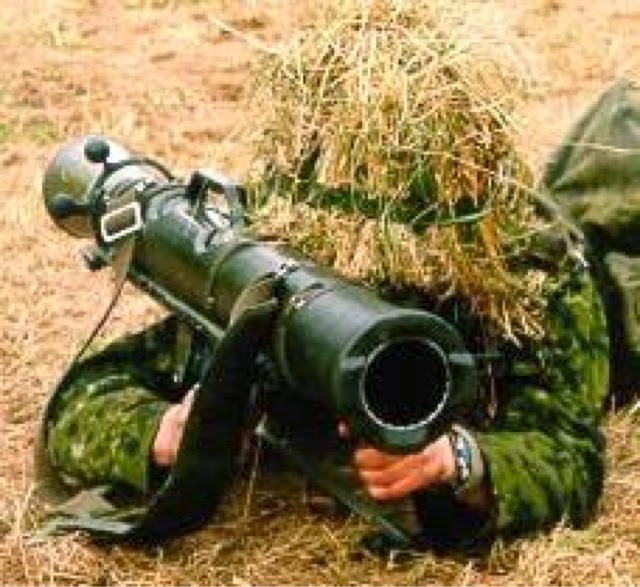 Two M72 LAWs were also issued to each squad: 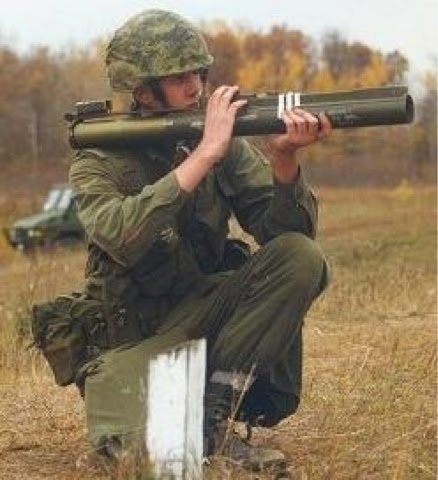 So this makes my platoon stand 12 rifles, 3 LMGs, and 3 Carl Gustavs. In the early 80s, individual platoons had no MANPADS, which seems to me to be a significant handicap. Six two-man Hamlet teams (the Danish name for the US Redeye) mounted in Land Rovers were assigned at the brigade level, to be parceled out to the infantry battalions: 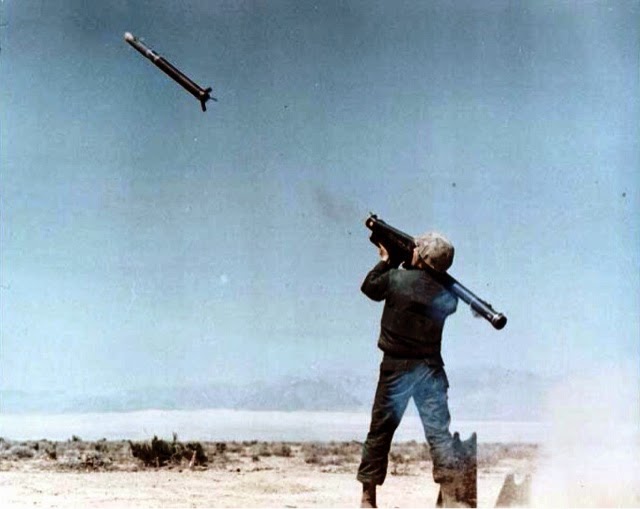 They weren't replaced by Stingers until the later 80s.
Additionally, each mechanized company had a pair of M125 mortar carriers (81mm): 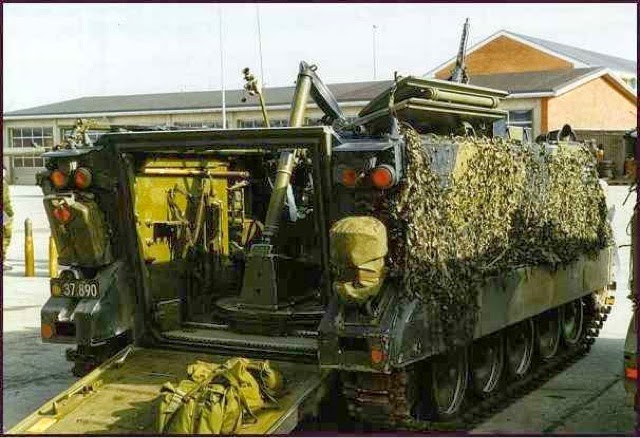 Motorized units substituted 3 mortars carried by a Unimog 1300L.
In other news, I used this weekend to finish the East German T-55 company that was missing from the panzer battalion for my motor rifle regiment, which is slowly taking shape. Here's the entire battalion, including command, in one of GHQs bunker boxes: 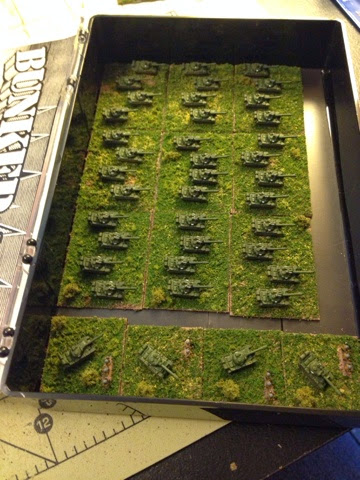 I also made a start on a Danish armored reconnaissance squadron. Here are 2 troops of M41 Walker Bulldogs: 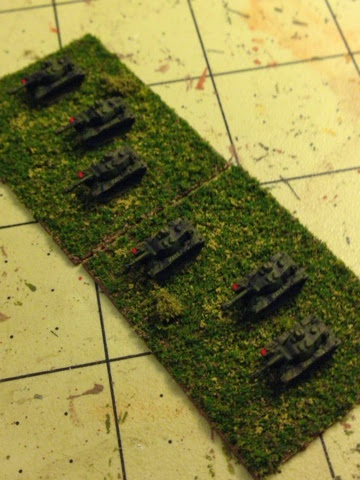 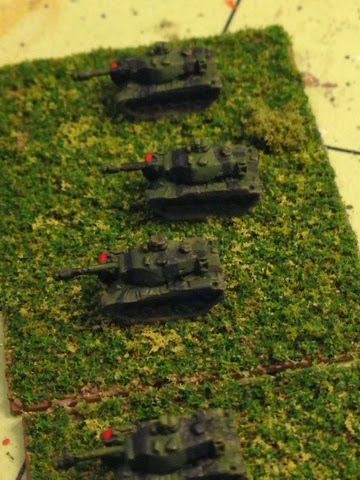 A friend mentioned "Oh! They're not exactly correct. They're not M41 DKs!" No they aren't. However, Danish M41s didn't begin the upgrade process to DK standard until 1983 (being completed in 1985), so because I begin my scenario on March 30, 1981, they would still have been standard, unmodernized M41s: 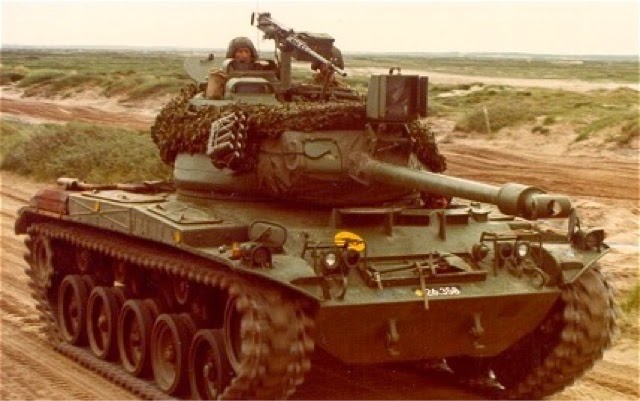 And just for conversation's sake, here's an M41 DK:

The visible differences being the addition of a laser range-finder box above the gun barrel, Leopard-style scalloped side-skirts, and a truly enormous turret bustle.
That polishes off this weekend. Another installment in a few days, if not before!
Posted by History PhD at 12:40 PM No comments:

I've been doing little beyond East Germans for two or three weeks, so I thought I'd do something different to break up the monotony. I've finished my first 1/600 building; a European farmhouse: 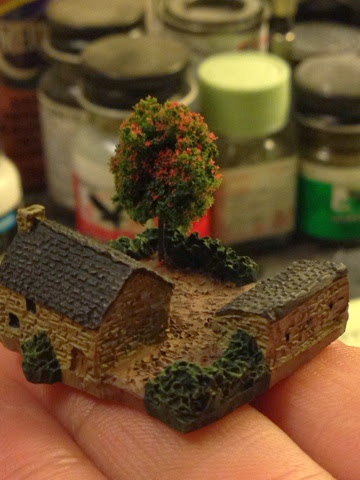 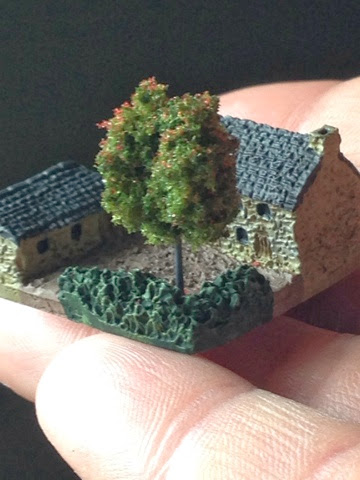 The photos don't really show the dry brushing and weathering. I drilled a small diameter hole in the corner and inserted a sewing pin as a tree trunk. I cut the point and about 1/3 of the length of the pin off first, then superglued it in place. The whole thing was primed, painted, and drybrushed, then I superglued a piece of Woodland Scenics foilage clusters in place as the tree's canopy. A little of their "red flowers" flock sprinkled on to represent apples and then a liberal spray of Testors Dullcote. Looks not bad. My first 1/600 building! I think I got the tree slightly taller than scale, but it's not outlandish or visibly out of place, so I think it's pretty good for my first go.
If I have any complaint about the building, it's that it's supposed to be "European". Architecture varies quite radically within Europe, so I'll have to avoid looking too closely in order to use it for a northern German farmhouse, but until the 1/600 market expands, it'll have to do.
Posted by History PhD at 7:12 PM No comments: 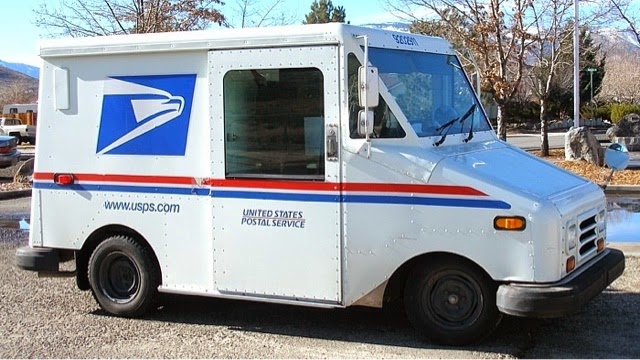 Today, I received a small packet from Picoarmour, mailed in Chicago 8 days ago!!  8 days, Chicago to Houston!?!  This isn't a one-off either. This is how long it takes EVERY Picoarmor order I make to arrive!!! I mail cards to my in-laws in Thailand in the same amount of time!!! And the post office has the gall to not understand how it is that they're going bankrupt!! Disgraceful!!
Posted by History PhD at 2:28 PM No comments:

Let's do a quick stocktake!!

Sometimes I get to painting so much stuff and trying to just bang it out as quickly as I can that I sort of lose track of what I still need to do and what I need to order next, which is the point I'm now at with my East Germans. That being the case, let's hold up and assemble everything that I've done so far and see where I am.
Here's an overview of my East German force: As you can see, there are a few units that have painted vehicles, but don't yet have flocked bases. And a few things haven't made it beyond the priming stage. But overall, progress has been decent, apart from infantry, which is the most time consuming, as well as very tedious to produce. They're just so tiny that they're a complete pain in the ass, so I put them off as much as possible.
Here's a more in-depth view of things. First, the majority of a motor rifle panzer battalion with command (minus one company that still needs doing): 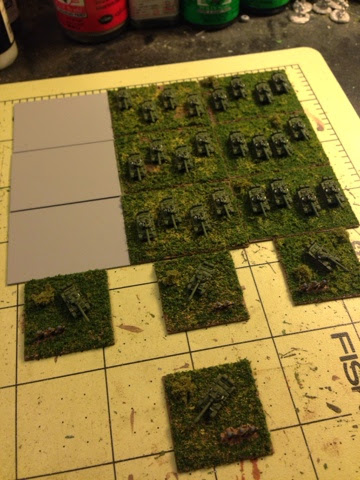 Next is a panzer reconnaissance battalion, completely finished: 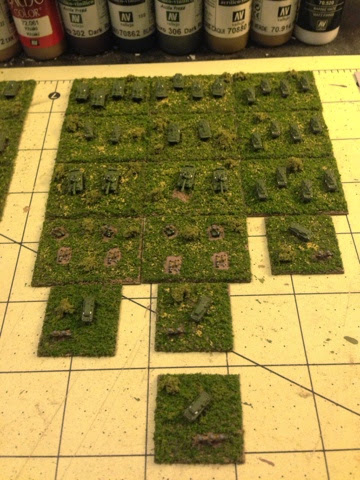 Two heavy reconnaissance companies and one scout car company, with company and battalion command.
Also about half of a panzerjäger battalion: 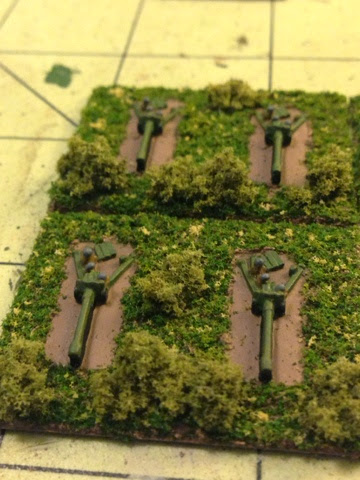 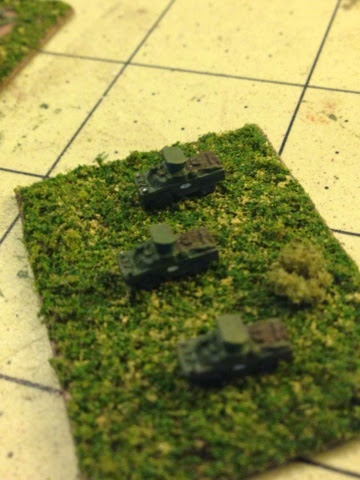 Actually one 100mm anti-tank gun company (of two needed) and half the necessary company of BRDM-2 Sagger launchers. The URAL-375D ammo supply/crew transport trucks for the guns are yet to be done. The guns are Soviet-built MT-12's.
Actually, the major reason I wanted to have a look at all my East Germans in one place is that to this point, I've been ordering and painting by whim, whatever seemed attractive and/or cool-looking. Definitely things that I'll eventually need, but not geared toward quickly finishing whole units that I'll need for my LANDJUT 1981 campaign. So this is my "quit screwing around!!" to myself. I need to begin being more organized and order/paint to a plan. The same goes equally for my Danes and West Germans, which I've also been painting willy-nilly.
Time to go reorganize my list of Picoarmor orders....
Posted by History PhD at 2:02 PM No comments:

Saggers and other toys

Painting a few command stands this weekend, as well as a stand of AT-3 Sagger anti-tank missles: 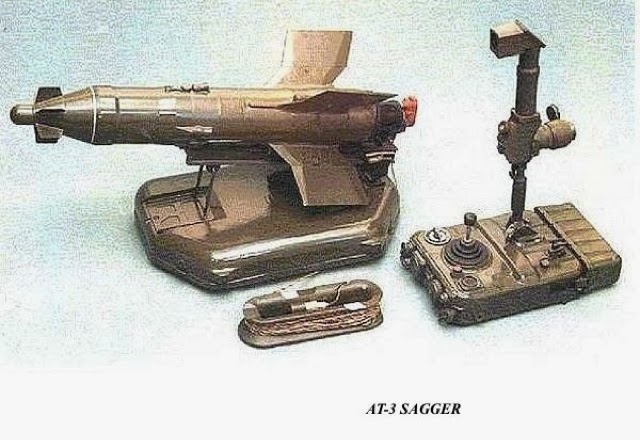 The O8 pack contains models that are very obviously Saggers, but also includes some that are different and could be used for Spigots: 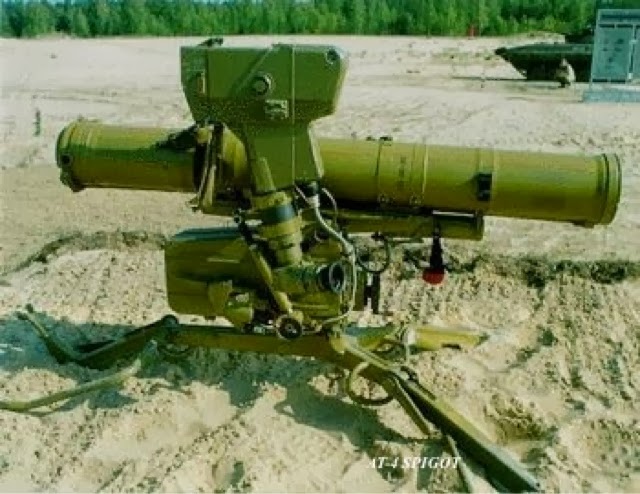 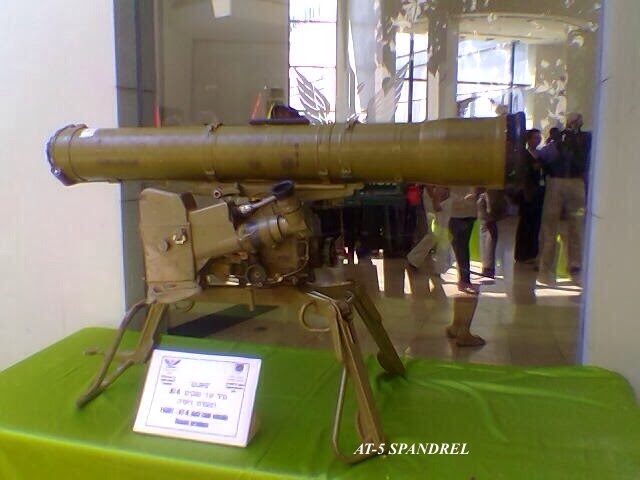 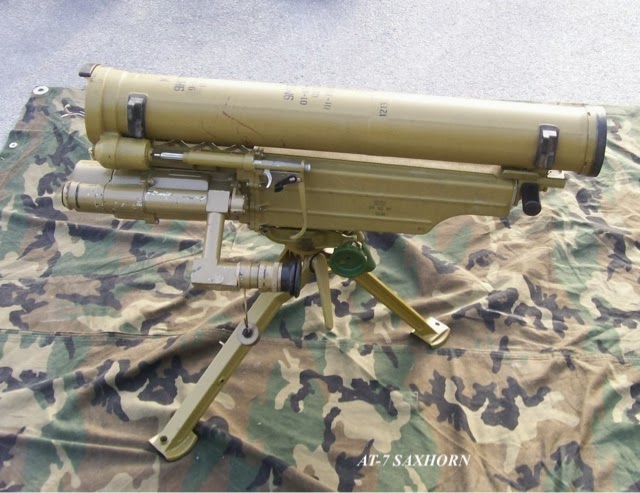 In 1981, the East Germans had tons of Saggers, quite a good number of Spigots, and even a few Spandrels, but Saxhorn had only been in service since 1979, so only a small number of Soviet units would've had them.
Here are my East German Saggers: 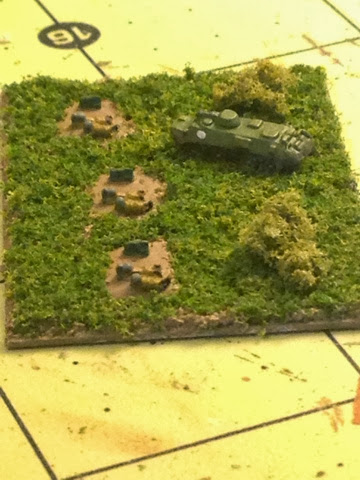 And two BDRM-2U and one T-55 command stands: 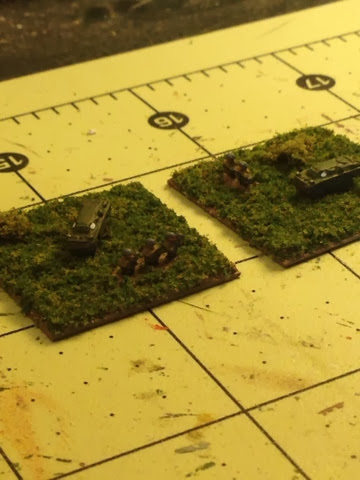 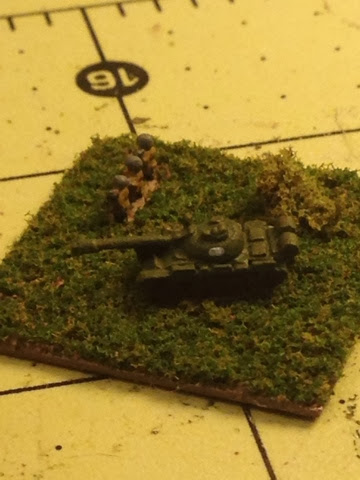 I'm also trying to get another company of T-55's done so my panzer battalion will be finished. That will get me about one third of the way to a complete motor rifle regiment. Whew. Still a way to go though. Not counting various support units, I need 3 motor rifle battalions and 1 panzer battalion.
Otherwise, just texturing a lot of bases this weekend, which is less than photogenic. However, I feel a creative burst coming on. I haven't made a terrain feature in quite a while and I've never done one in 3mm. I have a 1/600 European farmhouse coming from Picoarmor and I need something to go with it. Standby....
Posted by History PhD at 11:41 AM No comments: