Making a start on Bundesmarine aircraft

I received a small shipment from Dom's Decals today, in amongst which was a pack of four 1/600 Tumbling Dice F-104 Starfighters, which I intend to paint as West Germans and divide equally between the Bundesmarine and the Luftwaffe.
West Germany occasionally used their Starfighters in the interceptor role, which is what they were designed for, but the vast majority of use was as a fighter-bomber. The German fleet of F-104's were virtually all G models: 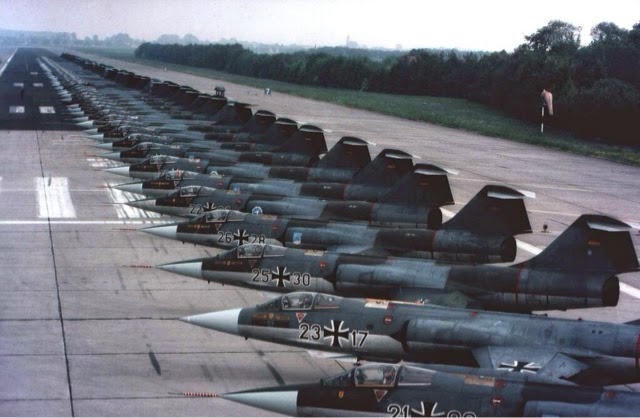 The G being an attempt by Lockheed to improve (or more likely to obscure) the aircraft's appallingly poor flight characteristics at low speed and low altitude. If there was ever an aircraft that was less suited to the ground attack role, I can't think of it. Perhaps a 747. West Germany lost 292 out of 916 F-104's to various accidents, generally related to low level, low speed ground attack training. That's 32.88%! Other countries that used the G model had similarly high loss rates, from 30%-40%. Those countries that used the Starfighter solely as a high altitude interceptor experienced a much lower loss rate.
As an aside, a grim joke that was common in West Germany in the 1960's and 70's was "What's the best way for a civilian to obtain ownership of a Starfighter? Buy a small plot of land and wait". It's interesting to note that Lockheed was eventually found guilty of bribing quite a number of European, Asian, and Arab politicians in order to get the F-104 purchased by their respective governments.
The TD models really are very good and fairly free of flash, defects, etc.: 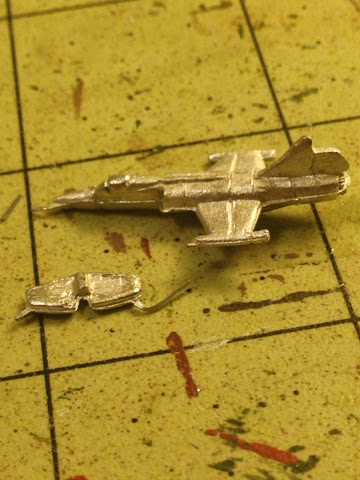 Just a minor molding seam and a few casting vents, all of which are easily removed. After fitting the one-piece horizontal stabilizer assembly (a slightly fiddly process), this is what you get: 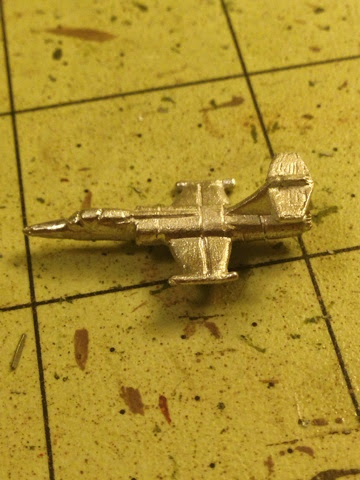 It's probably a C model, as it doesn't have the extra large rudder fitted to the G: 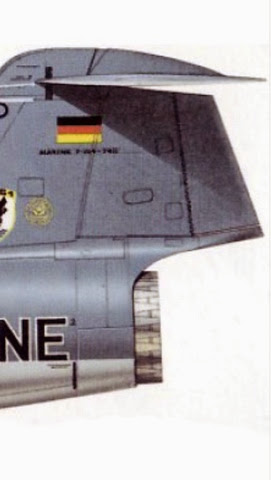 which was an attempt to give the pilot more control during low-level flight. As you can see, it extended well past the afterburner nozzle. I'll use them as a G. In this small scale, it's not noticeable.
The West Germans used the F-104 in the Bundesmarine as a maritime strike aircraft, armed with Kormoran anti-ship missles, though all Navy pilots were cross-trained to also operate against land targets,: 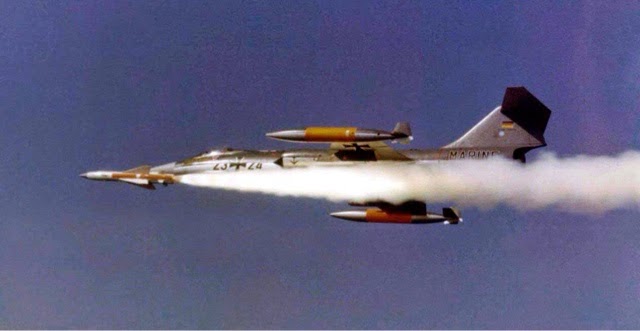 as well as in the Luftwaffe as a ground attack aircraft: 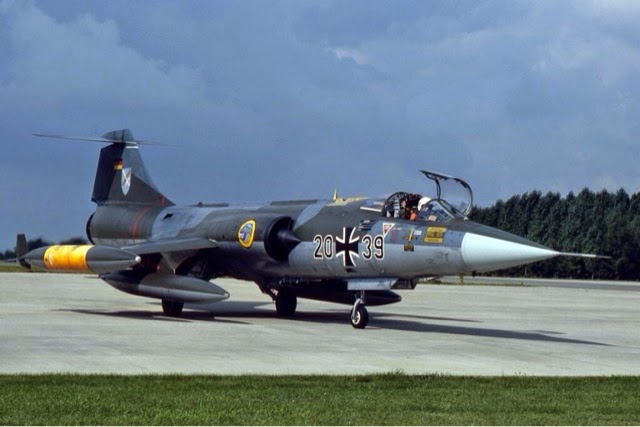 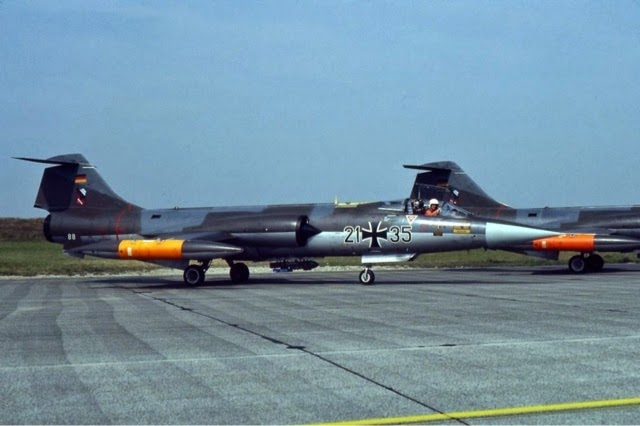 As you can see, the Germans applied a fluorescent orange to the wing tanks as an aid to increase visibility from the ground and yet painted the aircraft in a camouflage scheme. Is it just me or is that...umm...stupid? Needless to say, I don't keep international orange paint lying about, so I'll have to order some before I can finish these models.
I'll paint the Luftwaffe jets in a standard Norm 72 that I've discussed before when I was painting Alpha Jets. The Starfighters were camouflaged on the upper surfaces only and the lower surfaces remained in bare, but not polished, aluminum. For the Marine, I'll use their Norm 76, which was basalt grey upper surfaces, though a slightly darker shade than was used by the Luftwaffe (until it faded). Lower surfaces were again in bare aluminum: 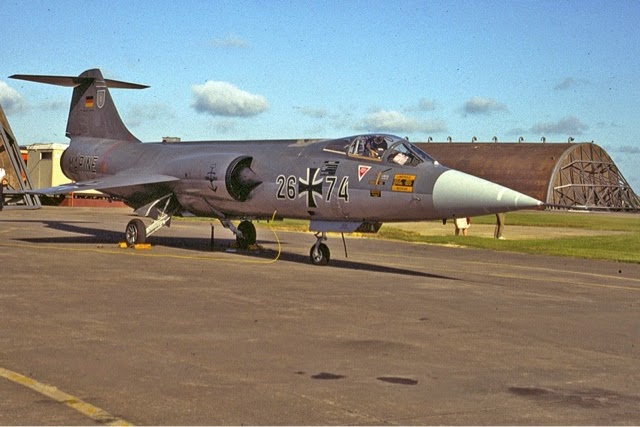 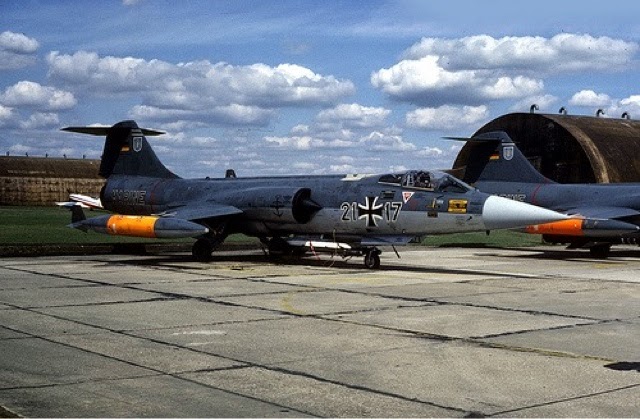 which became lightly oxidized fairly quickly and thus generally appeared to be a light grey. I must say, I'm very tempted to use a very pale light grey paint, however, I'll try some aluminum first and see how I like it.
For the "MARINE" decal, I'll simply chop the S off a couple of American "MARINES" decals and there we go: 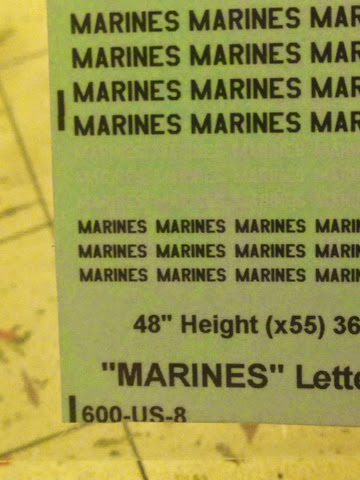 Here are two of my four Starfighters on their flight stands, primed and ready to be painted for the Bundesmarine and then have their stands textured and flocked: 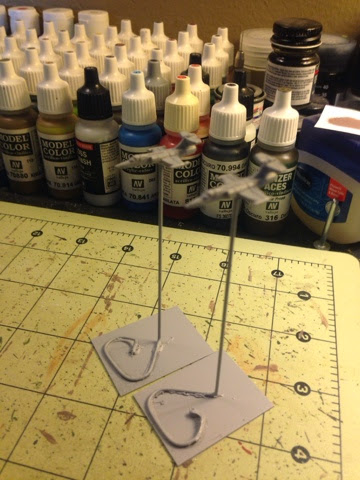 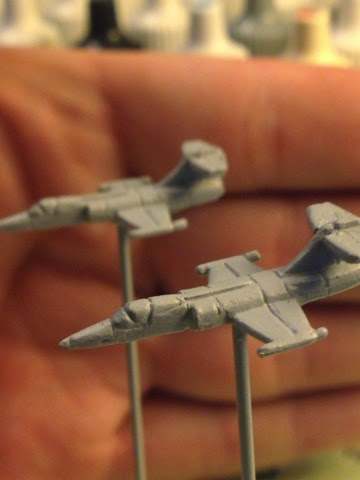 (Sorry about my hand in there, but I needed a background to get the camera focused on the foreground.) I'll show you the finished products as soon as the necessary paints arrive in the mail!  More next time!
Posted by History PhD at 8:24 PM