The REAL terrain of Southeast Asia!

Having been stationed in Southeast Asia (northeastern Thailand) for 18 months when I was in the Army, let me clear up a few misconceptions that wargamers seem to have entrenched in their minds, as far as the landscape of the area. Here are a few key points to remember when you're buying/building your terrain for Vietnam:

1. DON'T buy lots of palm trees!!!!  I know Hollywood wants you to believe that Vietnam is wall-to-wall palm trees, but it's not true!!  The only places you will see palms are along the banks of rural creeks and rivers, in a tree-line set back from the beach, scattered around in towns, and in "orchards" on the numerous coconut plantations. Rarely will you see them elsewhere. Also, except on the plantations, palms in Vietnam are NOT the tall, thin, "South Seas" coconut palms. They're shorter and a bit scruffy looking. This is a typical river; a mix of deciduous trees with palms interspersed. This is along a tributary of the Mekong, above the Delta. 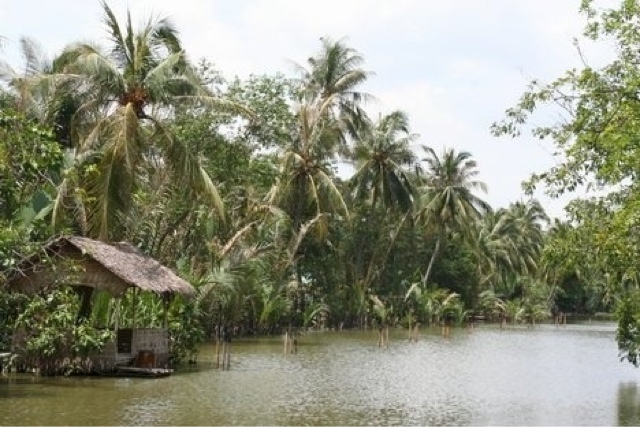 2. Vietnam is NOT all "jungle"! The majority of rural Vietnam is rice paddies, grasslands, scattered villages, and forests. What Hollywood wants to call jungle isn't "Tarzan swinging from the trees" stuff. It's quite simply rain forest, just the same as in Brazil or Indonesia or wherever. It's almost totally confined to the Central Highlands. Here's the upper Dong Nai River. 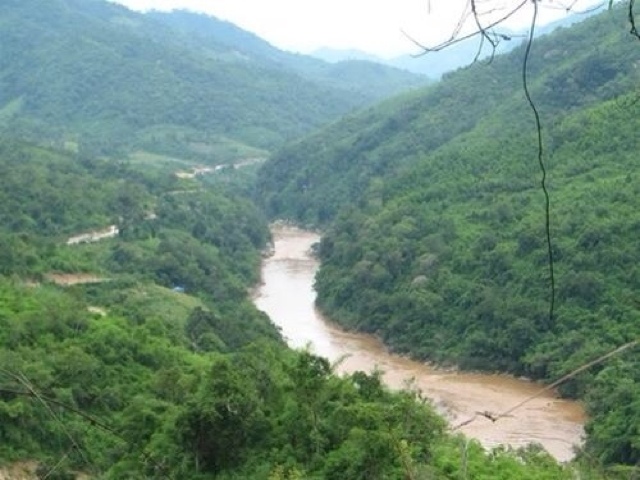 The Mekong Delta area is a maze of large and small rivers that reminds me for all the world the bayou country of my home: southern Louisiana. Basically a vast wetland with fingers of dry land between water courses. Here's an aerial view of part of the Delta, rivers zigzagging every direction 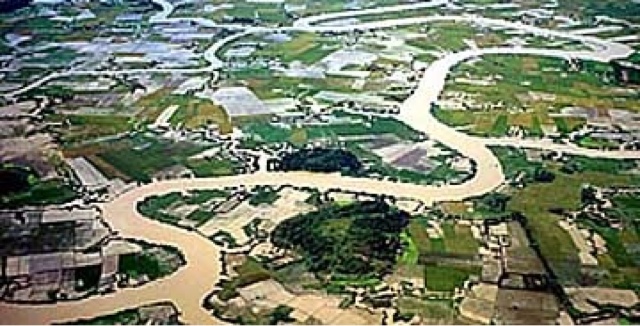 3. Your wargaming table can never have TOO many rice paddies. Paddies are probably THE defining feature of rural eastern and southern Vietnam and indeed all of Southeast Asia. They come in all shapes and sizes. Solitary farm houses will always have one or two smaller ones nearby and villages will be surrounded by them 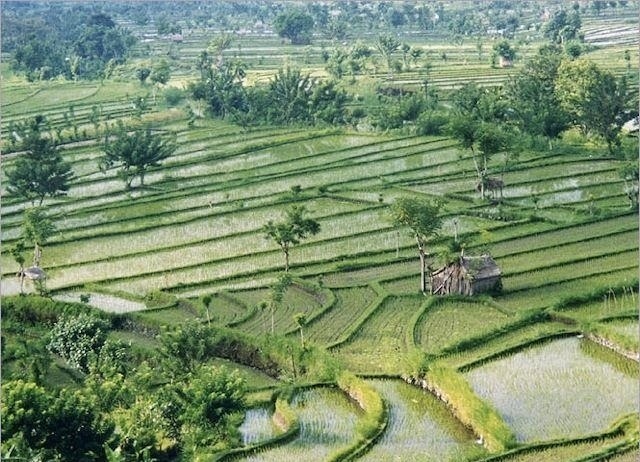 If it's before the rice sprouts, the water in the flooded paddies varies in color from "mud" to "tea" and every shade in between 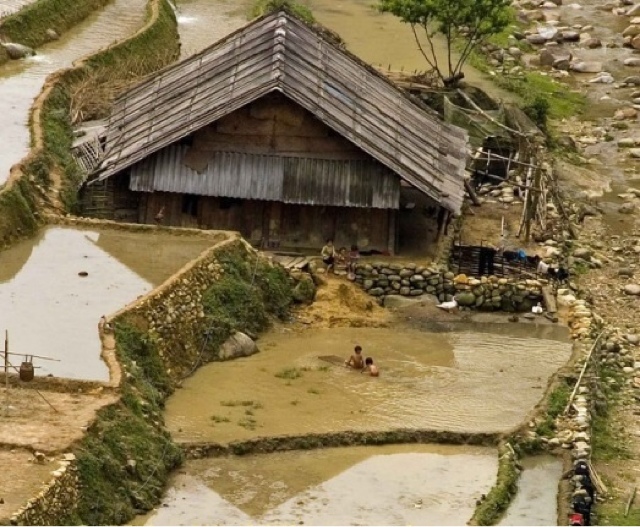 After the rice sprouts, the colors of the fields vary, depending on how far along each crop is, exactly what variety of rice was planted in each paddy, etc. 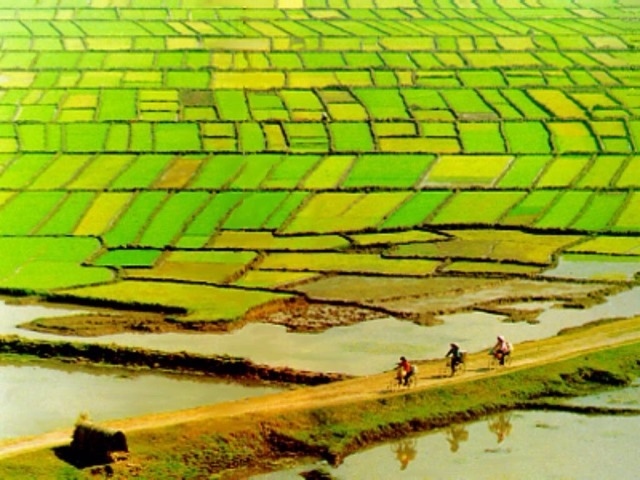 4. Put away the blue paint for your rivers. Vietnamese rivers, large and small, are one color. Mud. To be sure, the shade varies in different parts of the country and along different stretches of the same river, but it's always muddy. Here's the Mekong, near the mouth of the Delta And here's a small tributary in the Delta 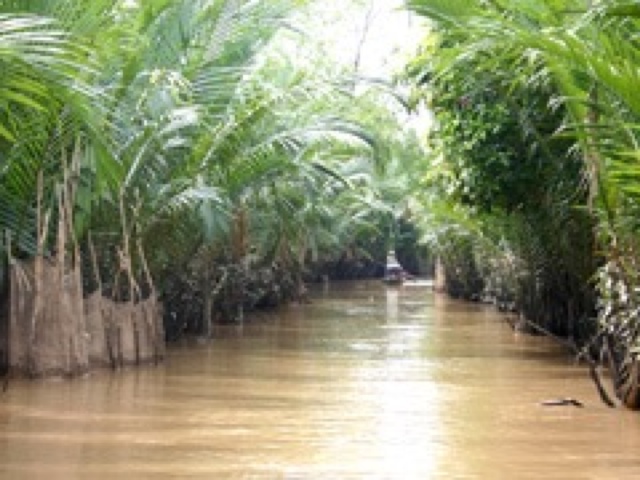 Here's the upper Mekong, just inside Vietnam, on the Cambodian border 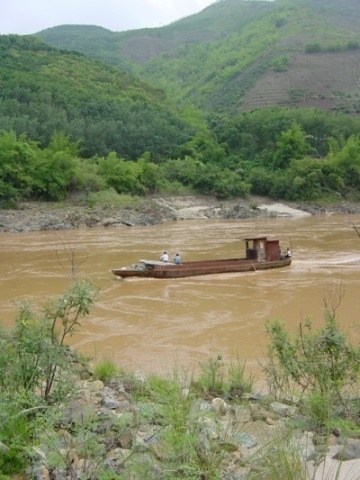 And this is farther up the Mekong, just inside Laos 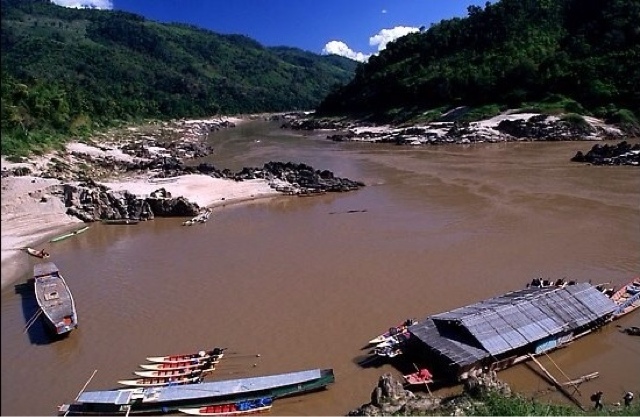 And two shots along the lower Dong Nai, not too far from Cat Tien 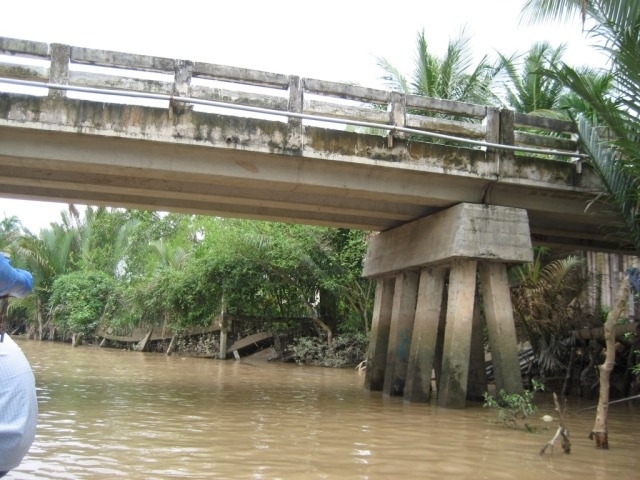 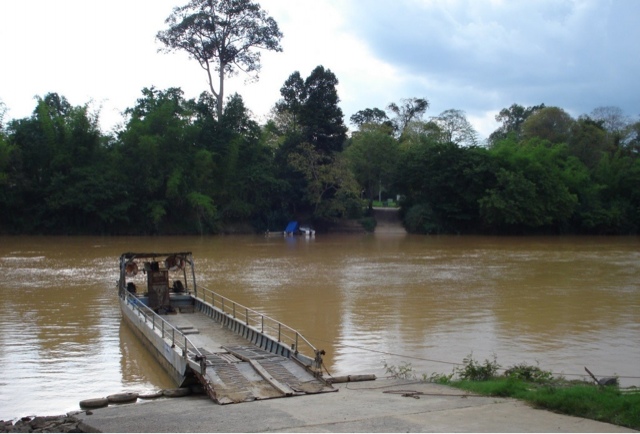 For those who can't shake their addiction to those horrible little plastic palm trees that come 50 for $15 from China, more power to you. It's your game and you should have the table decked out any way you want. But for those who (like me) want to depict the landscape of Vietnam as accurately as the scale allows, I offer the above observations in the hope that they'll be helpful.
Posted by History PhD at 7:58 PM